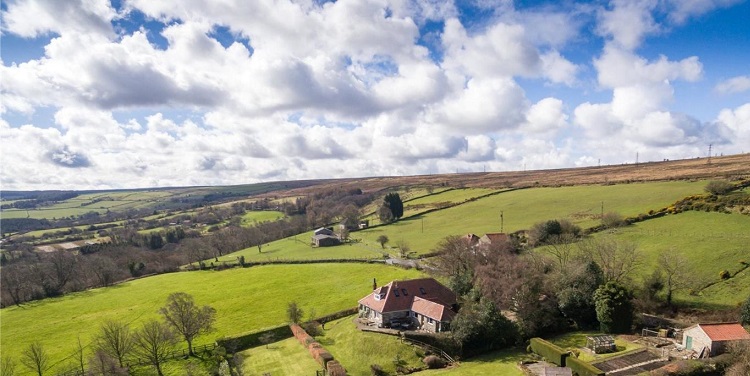 Sleights is quite a sizeable village, located approximately 3 miles from Whitby, and is a village in two parts, divided by the River Esk. The name Sleights is derived from the Norse for flat land near water. At the lower end of Sleights, and accessed by the road along from Ruswarp is Briggswath. Here is the Briggswath and Sleights Methodist Church built in 1905 to replace the former built in the 1820s.

View of Whitby from the top of Blue Bank

Also in Briggswath is Perrys, a delightful river garden café, set in landscaped gardens, with an 18 hole putting green and ample parking. The family run nursery sells a variety of plants as well as garden gifts. This is a beautiful setting alongside the River Esk. It is open from March to October.

The Salmon Leap on the Esk River

The stone and steel road bridge, over the River Esk, spanning both the river and the Railway line, was opened on the 26th January, 1937. From the bridge to the right, there is a good view of the Salmon Leap, which is a small weir enabling the salmon to swim upriver to the spawning grounds. This is usually between October and December. When the river is in flood it is possible to actually witness them leaping.

From the bridge, viewing to the left is the Salmon Leap Hotel, a popular public house and beer garden.

Further along past the Salmon Leap Hotel, is Sleights railway station, served by the Whitby to Pickering Esk Valley line. This is a wheelchair accessible station. The North Yorkshire Moors Steam Trains, also pass through this station, but unfortunately it is not a stopping point.

At the end of the platform there is a box girder pedestrian bridge over the river to Briggswath. The road to Sleights cricket field is further along past the station.

The A169 passes uphill through to the village of Sleights. There is a post office here as well as general store, bakery shop, butchers and tea rooms, with parking on the opposite side of the road. An antique shop, the Netherdene hotel and Eskdale fisheries (a fish and chip restaurant and takeaway with car park) are also on the main road, with the Plough Inn public house at the end of the village at the foot of Blue Bank. Blue Bank is a steep winding uphill road leading to the moors. It has a gradient of 1 in 4.

View of Whitby from Blue Bank

There are many self-catering and bed and breakfast establishments in Sleights. There are two churches, the Church of England St. Johns the Evangelist, built in 1895 on the site of a former church. This church can be found on the corner of Iburndale Road. The Roman Catholic Church of English Martyrs was built in 1998, replacing a temporary structure, and is found in Eskdale Close.

Other activities to be found are horseriding and flyfishing on the River Esk. The Sleights Horticultural Show is held every August on the sports field,

Sleights was the home of the infamous Flint Jack, real name Edward Simpson, who in 1867 was sent to prison for hawking fake fossils, coins, roman artefacts, flints and other antiquities to museums, archeologists and geologists.