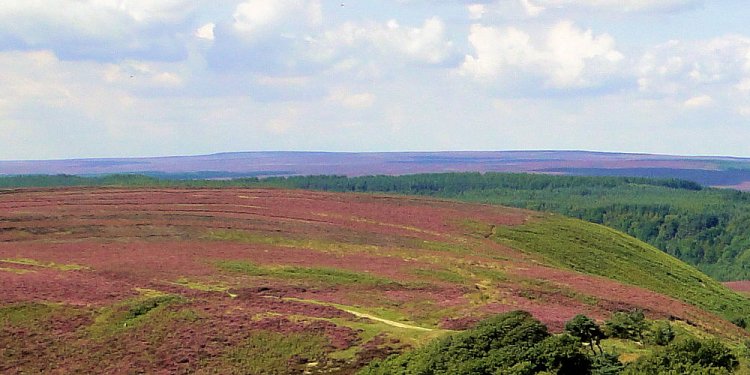 Lift your spirits in the stunning Esk Valley countryside on a 5-mile circular walk that runs between Glaisdale and Egton Bridge. There’s history and romance in the air, both at beautiful Beggar’s Bridge and also along the ancient stone trods, or pathways, that run through the pretty bluebell woods near both settlements. On the upper stretches the high farmland offers some lovely views, while down in the valley sections the babbling River Esk is never very far away. Why not come by train? Both Glaisdale and Egton Bridge are stops on the Esk Valley Railway, so you can walk the whole route from either station.

The walk mainly follows field paths and woodland tracks – take care on the stone trods, which can be slippery under foot. There's a steep climb out of the valley between points 4 and 7 and another steepish climb at point 12, and there are several stiles en route. There is also 1¾ miles (2.8km) of walking on minor roads – please take care.

Farm animals are commonly encountered on this walk – please keep dogs on a short lead. You may also meet cyclists or horseriders on the return route through the woods to Glaisdale Station – it's safer to keep your dog on a lead at these times.

There's a well-known local tale of romance attached to Beggar's Bridge in Glaisdale. An inscription on the bridge suggests that it was built in 1619, and the initials TF refer to Thomas Ferries, the son of a moorland farmer. When he was courting he had to ford the Esk to meet his young lady, Agnes, whose father considered Thomas too poor for his daughter. Thomas resolved to seek his fortune at sea but, with the river in flood, was unable to cross to kiss his sweetheart goodbye. Returning later, a wealthy man, Thomas married Agnes and built a handsome bridge on the very spot.

Parts of this walk follow ancient pathways paved with stone slabs, known as trods. They are common in the National Park and the oldest may date from medieval times when monks travelled extensively in the area. Most of the routes, however, probably came into being between the 17th and 19th centuries.

There's a particularly fine example of a stone trod on the return route to Glaisdale through East Arncliff Wood. Known locally as the 'Monks' Trod', this and the stone trod near Egton Bridge could well be part of a locally used path to the site of St Hilda's Church (point 10 on the walk) – the church was dismantled in 1871 and replaced by the present mortuary chapel.

The River Esk is the only river in Yorkshire where salmon and sea trout thrive. The stretch of river known as Limber Gravels is one of the main salmon spawning areas on the river.